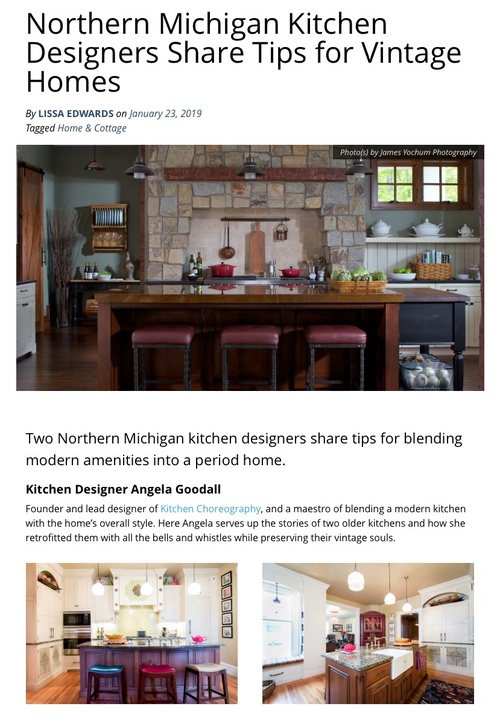 Published by My North Online

Founder and lead designer of Kitchen Choreography, and a maestro of blending a modern kitchen with the home’s overall style. Here Angela serves up the stories of two older kitchens and how she retrofitted them with all the bells and whistles while preserving their vintage souls. 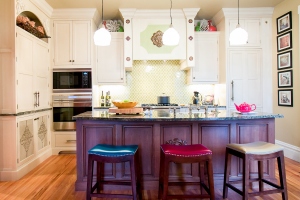 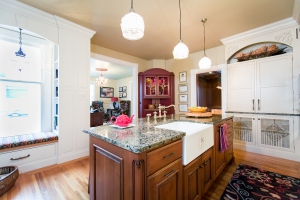 Built in 1897, this historic home was once where the steward of the former Traverse City State Hospital lived. The building is now a part of the 63-acre Grand Traverse Commons—one of the largest historic redevelopments in the country. As such, Angela had to have all her renovation plans approved by the projects’ developers, the Minervini Group.

The remodel involved building an entirely new kitchen in what had been a sitting room. The callout vintage features include:

Inset cabinetry built on site the old- fashioned way. This technique involves building one long face frame and then “insetting” the drawers and cupboards. The result is a seamless cabinet face.

A built-in hutch designed to look like an heirloom antique that covers the chimney and adds extra storage, including the pilasters on each side that pullout to store items like the mop and broom. Angela developed the homey red shade herself, then glazed it for an antique look. She also used refurbished antique glass for the front.

The refrigerator and dishwasher are paneled to match the maple cabinetry (finished in a dry-brush technique that makes it look old). “Stainless steel doesn’t belong in a vintage kitchen,” Angela says.

The new kitchen includes the completely new addition of a sunroom that feels old thanks to antique barn wood flooring from a barn in nearby Bellaire. Window seats were often found in 19th-and early 20th-century homes, so Angela created one here.

Angela says lighting was the biggest struggle. In most kitchens, she installs canned lights. But those would call for removing the original ceiling plaster, which she refused to do. Instead, she opted to rely on pendant lights, under-cupboard lighting and the hood light. 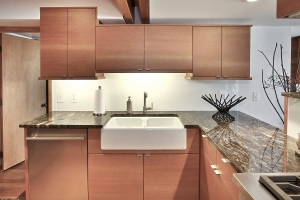 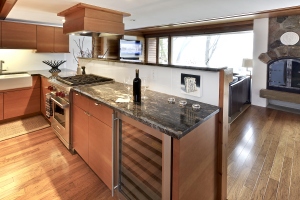 Known as Northern Michigan’s master modernist architect, Glenn Arai designed a number of homes in the region between the 1960s and his death in 1978, including one commissioned for Dr. and Mrs. Douglas Frantz in 1970 on Old Mission Peninsula.

The original floor plan included a sunken dining room, which, coupled with a massive stone fireplace, made any spatial changes difficult. “In a Glenn Arai home the structure is what it is—you can’t relocate things easily,” says Angela, whose team was hired to refurbish the kitchen by the current owners Chris and Donna VanSteenhouse. The homeowners opted to leave the kitchen’s original L-shape, focusing instead on the following changes:

While stainless doesn’t generally work in the kitchen of a 19th- or early 20th-century home, it rocks in mid-century modern design. The only worry Angela had about updating the appliance was: Would the new SubZero refrigerator fit? “That was the most nerve-wracking day—it fit with just 1/4-inch to spare,” she says with a laugh.

Likewise, the new, under-mounted creamy porcelain apron-fronted sink in lieu of the clunky old two-basin chrome one adds calmness to the room.